When I was making my tiled fireplace the one thing I wanted was  for the tiles to have some texture and to look like actual tiles. So I searched the internet of course!  I found one awesome tutorial by the VERY talented Chris Toledo. If you have been following mini’s on Instagram or Facebook groups no doubt you have seen his STUNNING work. He put up a great subway tile tutorial on the Greenleaf Dollhouses forum and it is one that I will follow in the future for sure.

But at this time I didn’t have the materials required so had to think of an easier option. And fast,  because when I want to make something I want to make it NOW before the urge/need/ideas slip off into the nether regions of my brain never to be seen again!

Not a lot really. A tile pattern, best if it has definite separation if you get me,  printed out. I used some thin cardstock. A knife for trimming. Some brushes. This magic stuff, Triple Thick Gloss Glaze (or something similar it has to be VERY thick) and the ubiquitous toothpicks which I forgot to include in my photo – because brain etc. 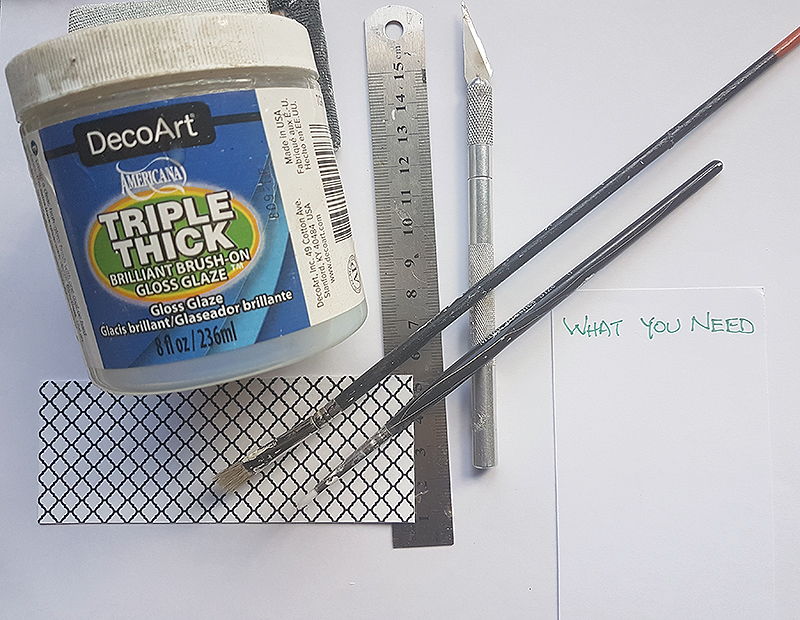 There is no reason why you can’t colour your tiles and that’s what I did for my table.  Depending on the look you want, you can either colour them BEFORE adding the Triple Thick coats, or AFTER as I did. The best thing to do is just make some test pieces before coating/colouring your actual piece.

Coat the card with 2 coats of triple thick.  You have to work fast with this stuff.  You get a smoother look if you actually pour some ONTO the card and then spread it using your brush.  If you have too much you can smooth it off and then return it to your tub by scraping it off your worktable like I do hah! The colder your room is, the harder it is to “work”. I waited about 15 minutes between coats. Let it dry for a day or so to avoid denting it or getting fluffy bits in it. 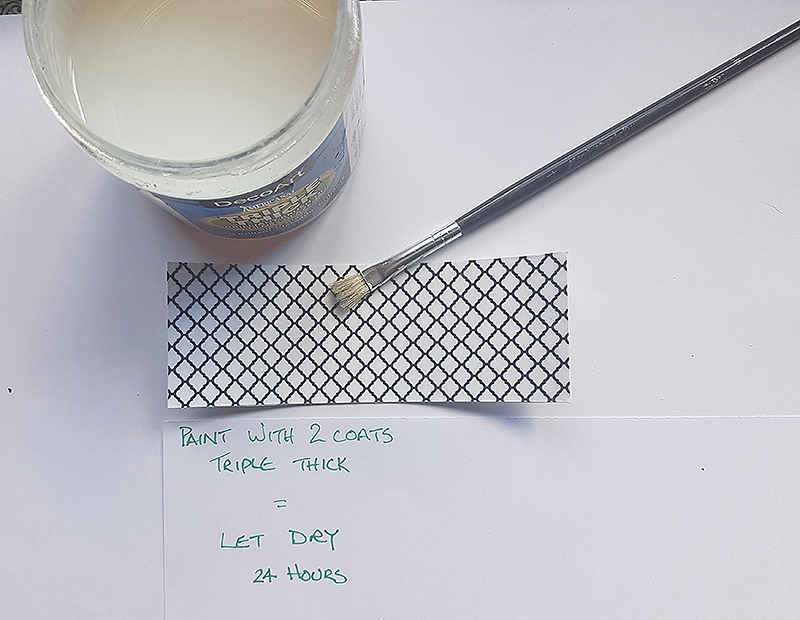 So,it’s the next day and your piece is dry. A word of caution here: avoid bending the piece too much as the triple thick CAN crack. Trim your coated pattern to the size your project requires. I am making a tile top table for this tutorial. Remember the 70’s? I do =/ 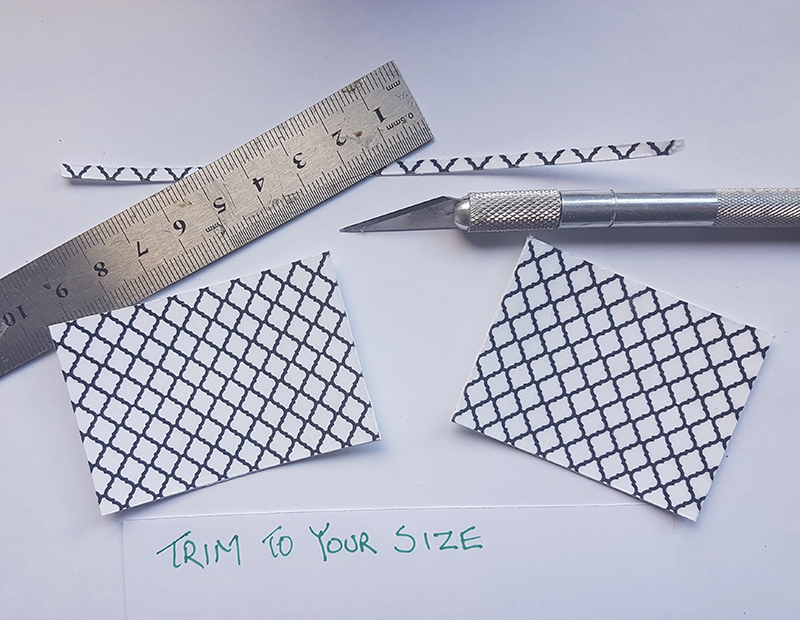 At this stage I decided that for the table, I wanted them to have some colour.  I tested various colours and various mediums as you can see on my test piece below.  I decided on a silver sharpy for this table.  For the fireplace I just left the pattern as is.

It’s time to make your “tiles”. Get a dollop of Triple Thick on the end of your toothpick.  I tried a few on a scrap piece to try and judge how much I need. You can do your dollops before or after making your piece – whatever works for you. I chose to do it after to avoid cracking from too much handling. 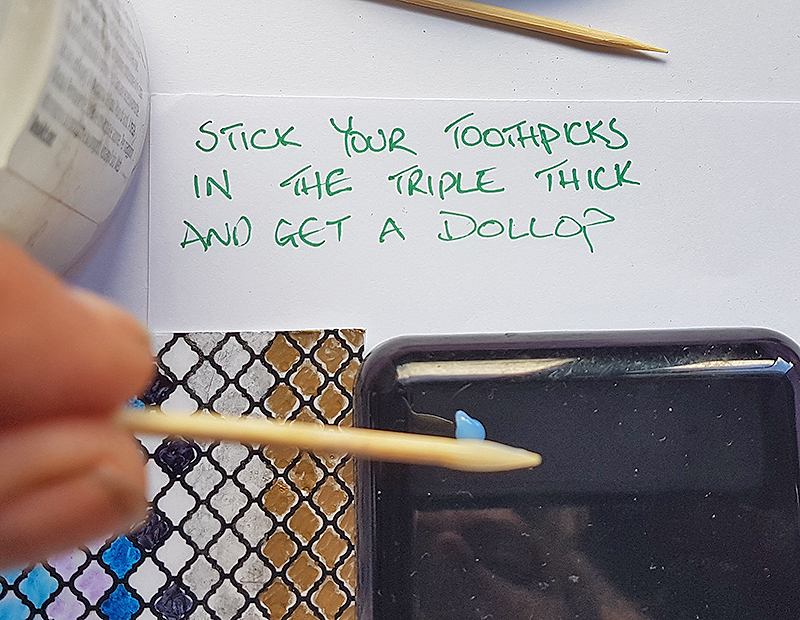 Because Triple Thick is so…um…thick…it forms a dome (let’s not get into the physics of fluids and surface tensions haha!) 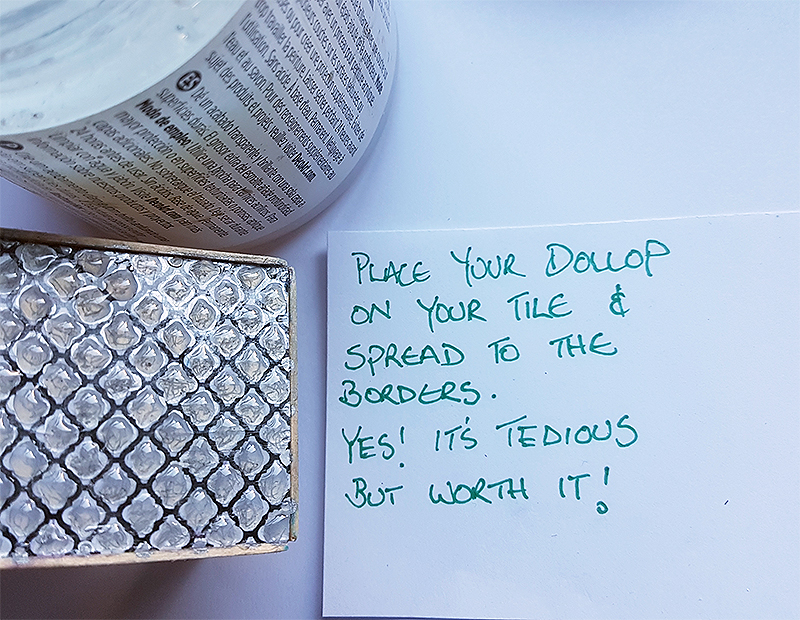 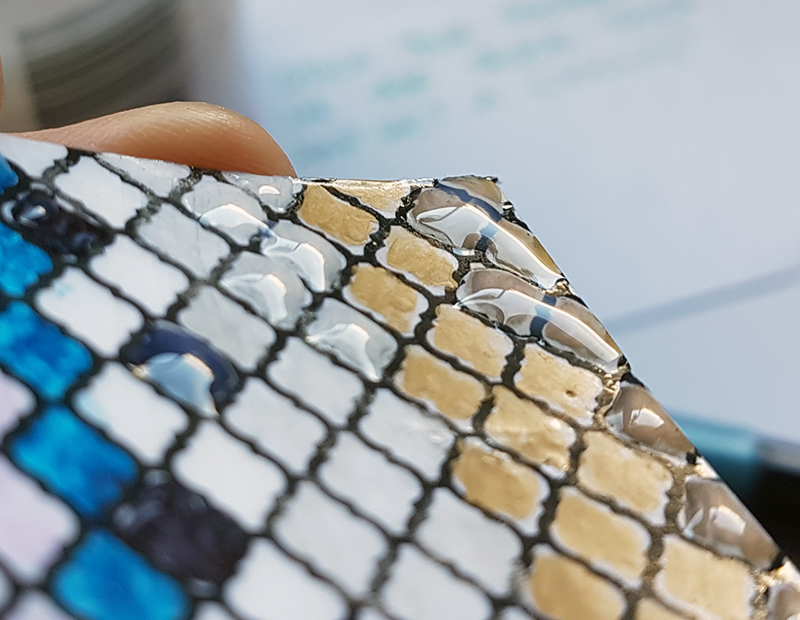 Triple Thick goes on a little cloudy but dries totally clear.  I must admit I DO love this stuff a LOT! Once again let it dry for about 24 hours before handling to avoid denting the surface.

Thats it really! You don’t HAVE to have domed tiles but I like realism and when the tiles catch the light they look fabulous! I have included a little video so you can see what it looks like =) 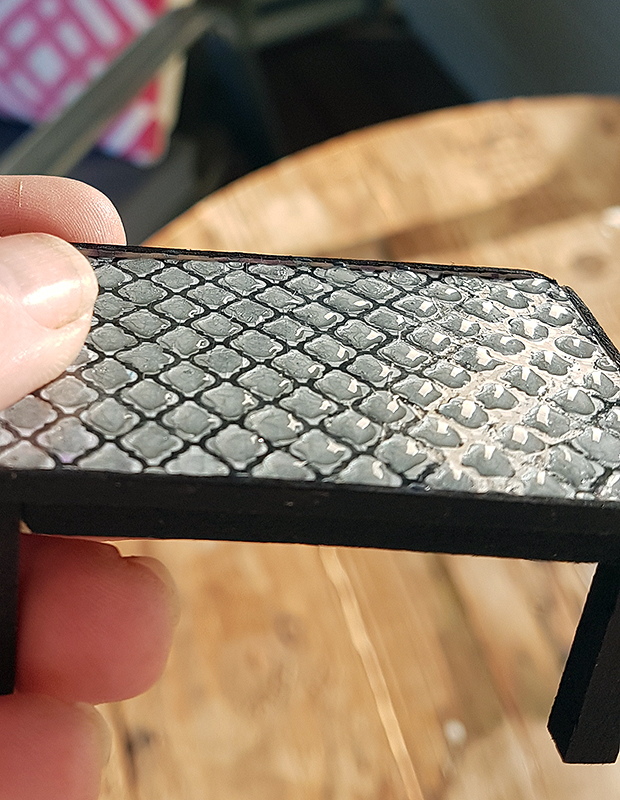 1:12 scale1:24 scale1:48 scaletechniques
Previous Post Furnishing the Dollhouse for a Dollhouse
Next Post Starting the Livingroom - floor and fireplace

This site uses Akismet to reduce spam. Learn how your comment data is processed.

I have a manbaby, a furbaby and a love of miniatures I am also fully in support of my new new hatred for housework =)